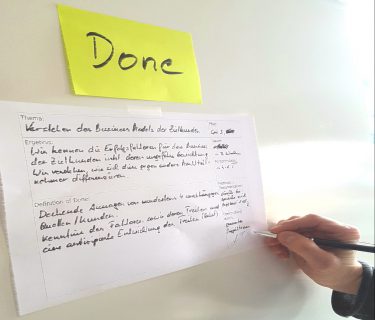 In an earlier report, we explained that agile proceedings bring many benefits, especially in an uncertain project. Therefore, agile project management must also be especially good for the early phases of development of innovative products. In the area of software development, the application area of agile methods are primarily in the development phase and beyond. Scrum & Co hardly offer any methodology support in the early phases of analyses and conception.
Six project teams from two companies (one from the area of data and energy transfer and the other, a manufacturer of laboratory equipment) took the challenge together with five is, to utilize principles and tools from the agile methodology briefcase in the early phases (from the idea to the go to development).

The following lessons and insights were learned:

The advantages of the agile method was seen differently by the individual members of the project team: Their reactions were everything from enthusiasm to rejection.

All in all, the experience was deemed as valuable. Most of the project teams were for another pilot application of the agile method in the early phase of a project.

Our insights from this pilot project are: